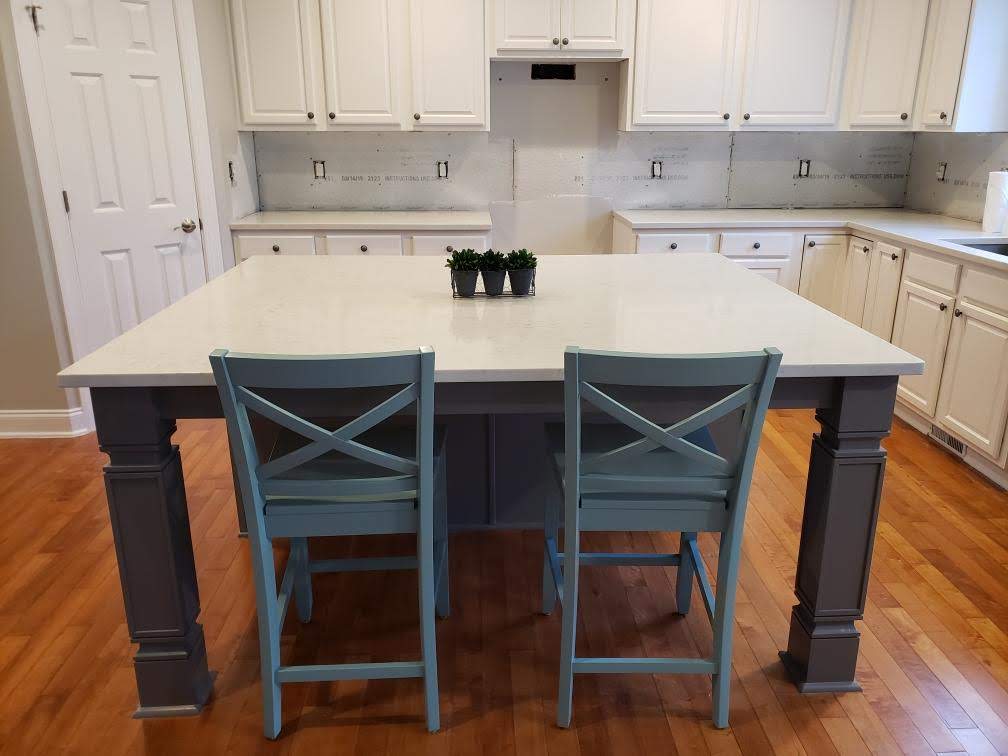 That’s not bad advice if you’re talking about walls , cabinets, or anything that needs a lift and can be painted. These days, that’s pretty much everything.

In this case, it’s the interiors of this house. Check out why the homeowners were not afraid to take on new colors…

And that’s just what happened. The biggest transformation has to be the kitchen.

We went from this…

Then there’s the entrance. It was confused. Bright colors on the left, muted, dark colors on the right and a little washed out in the middle.

Repose Gray from Sherwin Williams down the middle and to the rescue!

The living room was next. With massive walls and lots of natural light, what’s a designer to do? Stick with Repose Gray and freshen up those ceilings, trim and molding with the crispest white from Benjamin Moore, Decorator’s White!

And here’s what it looks like now. Just needs a little furniture. Really digging that industrial fan Sean found and installed. Perfect scale and design for the space! Nice job, Sean!

I say this a lot, but I’ll say it again. Sometimes a subtle color change creates the biggest impact. I knew we could not go dark on these huge walls. Especially with all that awesome natural light. Choosing a cool greige like Repose Gray feels lighter, elegant and it removes all those yellow undertones from the previous wall color. The floor already has plenty of warmth so this cool wall balances the space nicely.

Once again, Repose Gray to the rescue.

And, just in case you think the whole house is Repose Gray or another neutral, I’ll just say there’s a teenager in the house. She wanted to feel like she was living inside a pumpkin. You might want some sunglasses!

And now it’s not so quiet.

I love her Mom’s attitude. She was on Pinterest finding a way to tie the orange, gray and blue-green together moments after she saw the change. I always say there are no wrong colors…it’s what you match it with that makes it work or not.

Next to her daughter’s room is the bathroom. We decided to stay consistent with Gauntlet gray (on the kitchen island ) and paint all the bathroom cabinets the same color. That deep gray connects to that orange! Something tells me they will find the perfect bedding.

Last, but definitely not least, the guy who made all this happen. He doesn’t mess around with little rollers either!

Here’s how it looks now.

Hope you enjoyed the tour!

“No room can be called perfect unless it has real comfort.”'